Farnash Creek Ranch added a new mare to the herd last week! Maisie is a 10.5 year old sorrel quarter horse with experience cutting and working on a large cattle ranches. 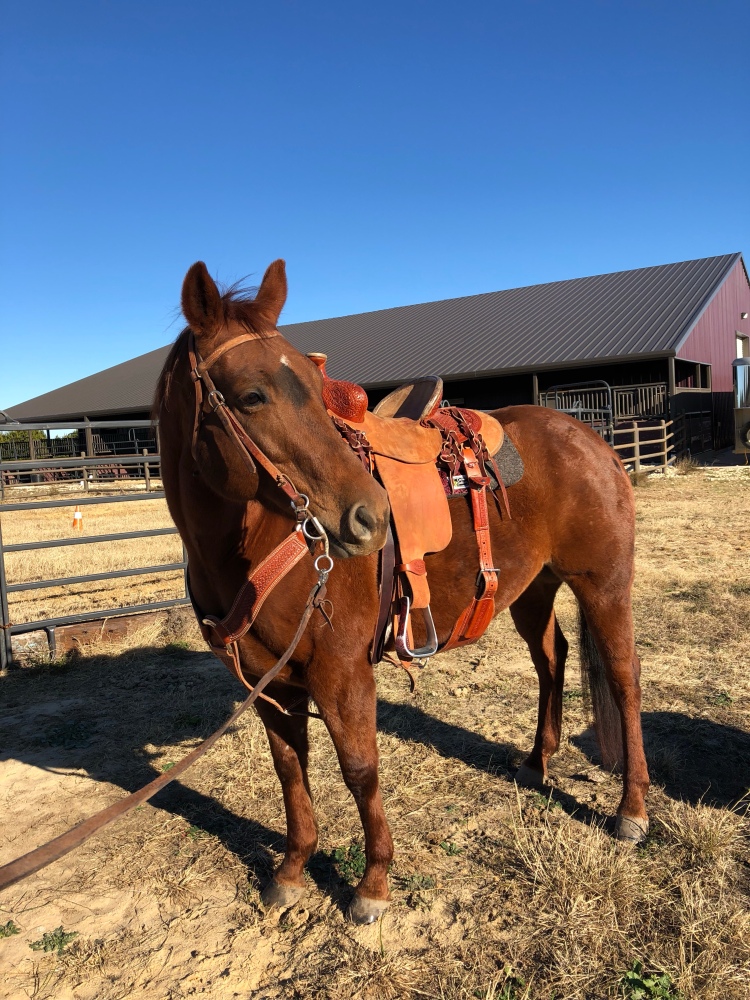 We think she will be a great addition to the ranch and will be an enormous help with ranch work such as roping calves, pushing cows, sorting and of course trail riding the ranch to check fences of course. We are so excited to have her here! The other horses aren’t so excited, although, she seems eager to be friends with them! The first day out in the pasture together they tried to run off and leaving her!

“Hey guys wait for me”

They eventually gave her a good sniff down but still they did not trust her! She still had to prove herself. I wasn’t sure she would be aggressive enough with the other horses because she was so docile under the saddle. She works so smooth off subtle cues like seat placement and leg pressure. I am a terrible rider and if she can follow my cues she must be good! I have never picked a horses hooves so easily. I gently touched her leg and she graciously lifted her hoof and held it there. I didn’t really even have to hold the hoof. I still get nervous picking hooves and she made it feel so natural.

After the second day out in the pasture with them she came in with a few bite marks and was much more cautious of the other horses.

She was especially cautious of Cisco. He is the biggest horse we have and he has also been the low man of the totem pole since his arrival over a year ago! I guess he was determined to get off the bottom of the hierarchy!

Bryon wishes he would run that fast on cows! He isn’t all he acts like on this video! He is a sweet shy lover except when someone new is around! Sometimes it is the shy ones that are the most fierce! He still gets an concessional bite by Sugar tho!

Rodie the undisputed ring leader also tried to get his intimidation in on her! The first day he ran her off from the hay ring. By day two, she wasn’t having anymore of him taking her food. We sat on the fence and watched Rodie go quietly into her stall after he had eaten all his food and tried to take her food. Within three seconds she had run him out of her stall. He tucked his tail and headed off the the hay ring! Now I think they are friends! Or friendly at least!

“I sorrelly apologize for taking your food”

This morning during feeding Cisco was also still trying to get a little intimidation in on her. He put his giant golden head in her stall and just showed her his teeth. She snapped back at him and let out the loudest “NEIGH” I’ve ever heard! She is standing up for herself! It won’t be long and she will find her place in the herd!

Horses are herd animals for safety reasons. There is strength in herds. Being part of a herd provides them safety and security in the wild. There are more sets of eyes and ears to look out for danger. There are more horses to protect the young horses from predators and dangers in the wild. This herd mentality is instinctive for them for this reason.

Humans are also part of herds. Many different herds. We have work herds, family herds, friend herds, online herds, etc. Unfortunately, we often have trouble integrating into our herds as well. There are many reasons why integrating into herds are difficult. Generally though it is simply that it is something new and no one knows what to expect or who to trust. There will often be bite marks and scars that will be left behind but ultimately there is strength in herds. We must get past all the hurt and move forward because there is support in herds. Just like Maisie we have to stand up for ourselves and be herd – (he he he) Herds are the support systems we rely on to protect us from the wild world of dangers. Love your herd and find peace and strength in whatever herds you can be apart of in this life. Embrace all the members of your herd and celebrate their strengths and encourage them in times of weakness.

“No man is an island, entire of itself; every man is a piece of the continent, a part of the main” -Ernest Hemingway For Whom The Bell Toll per John Donne

For heaven’s sake don’t be like chickens they try to kill the new one to the flock! DON’T BE A CHICKEN!